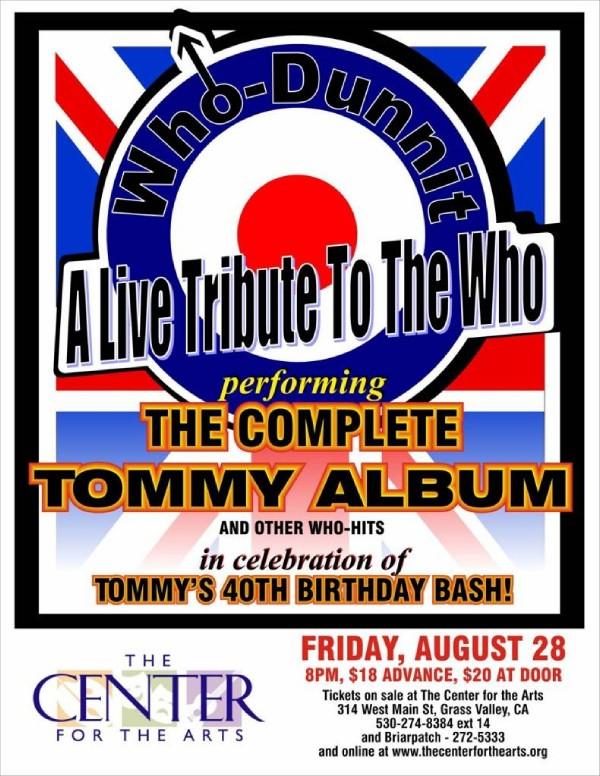 Who-Dunnit, The Ultimate Who Tribute Band, will play at MODSTOCK along with Arrival, Offshore, student bands, and more pro bands yet to be announced. The first annual MODSTOCK is an all-day free, peace, love, and rock event. We intend to have family activities like bounce houses and slides, food and drink booths, and 20 plus bands. The addition of Who-Dunnit makes the day just that much more exciting, especially to us Who fans!
Chris Saint as Pete Townshend
Guitar, Vocals, Tracks
Mo Debbage as Roger Daltrey
Lead Vocals, Guitar, Harmonica
Rob Elmore as John Entwistle
Bass, Vocals
Bob Turak As Keith Moon
Drums, Percussion, Gong You’ll swear you’ve been to a Who Concert!!!Who-Dunnit has been acclaimed as one of the most faithful reproductions of the sound of The Who. Who-Dunnit consists of four experienced Northern California musicians that share a love of The Who’s music. Who-Dunnit is a tribute to the boldness, creativity and depth of the sound and style of The Who. Pete Townshend fused rock and electronic music and was a pioneer in the field. Who-Dunnit spent a year painstakingly researching the instruments and recording techniques that Pete Townshend used to produce classic songs such as Baba O’ Riley and Won’t get fooled again. They then re-created these sounds so faithfully that at times it is difficult to tell them apart from the real thing. Pete Townshend and Roger Daltrey are portrayed in Who-Dunnit by two British musicians that grew up in England during the heyday of The Who. This gives Who-Dunnit not only an authentic British vocal sound but the ability to mimic the British invasion guitar style to a tee. John Entwistle and Keith Moon re-defined their instruments. These two musicians are portrayed in Who-dunnit by two incredibly talented musicians that have studied every subtlety of the original band members and re-create their sounds and style with incredible accuracy.With songs that amount to Rock Anthems, The Who were and are still today, a unique and stylistic band. Four of the most outstanding and innovative musicians of their time. Besides giving us incredible songs they created the concept of the Rock Opera. Who-Dunnit pays homage to Tommy in its entirety. So Join Together with Who-Dunnit!! Accept no Substitute!! Try to see Who-Dunnit Anyway, Anyhow, Anywhere you can. Become a Seeker of the music of The Who. Ask yourself, Who are you and try to discover The Real Me. Get on a Magic Bus and take an Amazing Journey with Who-Dunnit to re-live the sounds of the sixties, seventies and eighties.You’ll swear you’ve been to a Who Concert!!!

46 bands, the biggest concert we have ever done! All musicians should be there at least 3 …