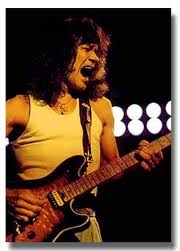 The following information was found at Wikipedia.

The Peavey EVH Wolfgang guitar series is the result of the collaboration between guitarist Edward Van Halen and Hartley Peavey‘s company, Peavey Electronics.

In Edward’s own words: “For as long as I’ve been playing guitar, I’ve always been searching for a certain feel and tone…I’ve experimented by tearing apart and reassembling hundreds of guitars in different ways searching for these qualities. Although I’ve ruined a lot of great guitars by having done this, I have learned what it takes to make a truly great guitar. The Wolfgang, after years of trial and error, (for me) is that guitar. Our collective efforts in designing the Wolfgang guitar have resulted in a versatile, quality-crafted guitar that feels great, sounds great and is truly inspiring to play. I’ve already put mine to the test in the studio and on tour and now it’s your turn.”

The EVH stands for “Edward Van Halen” while Wolfgang is Edward’s tribute to composer Wolfgang Amadeus Mozart (which he used again when naming his son, Wolfgang Van Halen, in 1991).

This is the top-of-the-line original model. It features a solid body (three pieces of basswood) and can always be identified by having two knobs (volume and tone) and an arched top. The guitar has a binding for looks, but there is no top.

The Standard models came in black and ivory. In some cases the black ones will have a top where they painted over a flame or quilt top that didn’t come out right. By looking real closely at the finish, one can see whether or not it is two piece or 3 piece construction. If it is two piece it has a top [4].

This model features a double-locking Floyd Rose recessed tremolo unit (lowers pitch only) with a 16″ locking nut. A stop-tail bridge version first was offered in late 1997[4].

Actually, there are two Wolfgang Standard models. The gloss finish models and the transparent finish ones (quilt and flame maple tops, solid gold and seafoam), these being called Standard Deluxe models.

Peavey made less than 2000 units in four colors before switching to flame tops. Since that time they have only come in a flame maple top. The solid color gold tops also have a top as does the solid “seafoam green” color; the Standard and Standard Deluxe were the only models made available until 1998 [4].

A solid basswood body (no top) guitar. It came in solid colors and sunburst. The necks are not birdseye maple and without the top you don’t have the same tonal qualities (lacks some brightness). They can be identified by having one knob and a flat top, and no binding, since there is no top; the tuners buttons are made of metal rather than the pearloid. Pick-ups are the same on all Wolfgangs up until 2004. The Special was first offered in 1998[4].

This guitar can be identified by a flame maple top and only one knob like all Special models. The Special Deluxe has a 1/4″ flat maple top where the Standard Deluxe starts with a 5/8″ (before carving) maple arch top. The Wolfgang Special was first introduced in 1998[4].

The Peavey EVH Custom Shop was a group of 4 highly talented craftsman each with their own specialty. It opened in January 2002 and ran until 2004. During the slightly more than a year that they operated out of Leakesville, so much time was spent on each guitar that they were only producing an average of little less than one Wolfgang Custom Shop model per day.
Approximately 285 Custom Shop guitars, either based on the Standard or Special model, were produced in Leakesville, of which 92 of these were specific orders and the rest were produced for the “Van Halen Vault” (a contest held in Van Halen’s official website which offered 12 unique guitars) or the NAMM show. The attention to detail really showed in the finished product.

Another 130 specific customer orders were produced in Meridian after mid 2003 as well as another 70 guitars, many of which are not really true Customs as they were using up remaining materials inventory. Some guitars where the only upgrade is a rosewood fretboard is technically called a Custom Shop, but most really are not. Edward didn’t want the production guitars to have rosewood fretboards so the only way they could produce them like this was to call them Custom Shop guitars.

Thus, approximately 500 Custom Shop guitars were built from 2002 through 2004, some 220 of them being specific customer orders (more than 100 of those were ordered or purchased by guitar collector Geoff Knapp and are pictured at his website, Rock’N Roll Weekend).

Peavey had an area at their website for people to “build” (and order) their own Custom Shop guitars. The basic options that anyone could select were; the body wood: top wood; fretboard wood; fretboard inlays; bridge type; hardware color; top color or graphic and matching/standard headstock. The body wood options were basswood (standard), alder, ash, mahogany, or even koa or korina which weren’t standard options. Bridge options were a stop tail bridge or a Floyd Rose Tremolo system in chrome (standard), gold or black. The Special models came with the birdseye (not hard rock) maple neck, which was an upgrade from a production special. For the fretboard you could select Birdseye (standard), Rosewood or Ebony. For the inlays they had pearl or black dots (standard), EVH Blocks, Tribal Flames, Skulls or no inlays at all. For the top you could select flame maple (standard), quilted maple, koa or none (solid body construction). There were about 30 colors to choose from including graphics and a custom graphic option[5].

This is me playing my Wolfgang last year at the Solstice festival.

This is what the new Wolfgang looks like now made by Fender.

This website uses cookies to improve your experience while you navigate through the website. Out of these cookies, the cookies that are categorized as necessary are stored on your browser as they are essential for the working of basic functionalities of the website. We also use third-party cookies that help us analyze and understand how you use this website. These cookies will be stored in your browser only with your consent. You also have the option to opt-out of these cookies. But opting out of some of these cookies may have an effect on your browsing experience.
Necessary Always Enabled
Necessary cookies are absolutely essential for the website to function properly. This category only includes cookies that ensures basic functionalities and security features of the website. These cookies do not store any personal information.
Non-necessary
Any cookies that may not be particularly necessary for the website to function and is used specifically to collect user personal data via analytics, ads, other embedded contents are termed as non-necessary cookies. It is mandatory to procure user consent prior to running these cookies on your website.
SAVE & ACCEPT