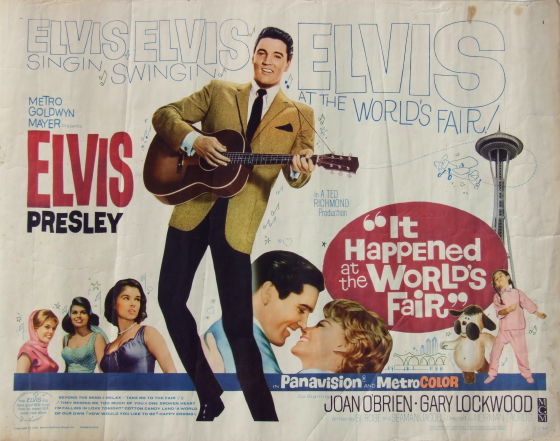 I have a 1964 Gibson LG1, a good sounding, great playing, affordable vintage acoustic. Same model as my bro, Elvis.

(used in It Happened at the World’s Fair, Viva Las Vegas,Girl Happy, Spinout and Live a Little, Love a Little)

With five movies to its credit, the Gibson LG-1 is perhaps the guitar seen repeatedly in more of Elvis’ movies than any other. Similar in look and finish to the 56 Gibson J45 seen and used by Elvis and others in several movies made for Paramount pictures, he was often seen using a late a LG-1 in several pictures made for MGM. The features suggest that the guitars could be mid ’50s to very early ’60s models, the pickguards indicates 1955 or later. However, he is first seen using one in the 1963 release of It Happened at the World’s Fair, production of which commenced in August of 1962 and in the first scene its used it appears relatively new.

In the film, he and Gary Lockwood who also starred in Wild in The Country, are cast as pilots who travel to Seattle in search of work/income to get their plane back before it goes up for auction. MGM apparently had at least two almost identical LG-1 Gibsons differing only slightly in appearance by the amount of thickness of the burst on the spruce top. He and Red West are pictured playing both guitars during a break in filming. Interestingly enough EPE sells a life size standee of Elvis playing that guitar as pictured in the movie.

Elvis is again seen with one of the Gibson LG-1s in promotional materials for the 1964 releases of Kissin’ Cousins and Viva Las Vegas. In addition to a Fender Stratocaster, an LG-1 is featured prominently in several scenes of Viva Las Vegas.

In its debut scene of that movie, for at least one or more takes the guitar winds up in the pool which could not have been good for it. The second LG-1, with the thinner sun burst finish, is used in a scene later in the movie and is again featured along with a Fender Telecaster in the 1965 release of Girl Happy.

There have long been shots seen floating around of his co-star fromGirl Happy, Mississippi native and pageant winner Mary Ann Mobley, pictured with the guitar. About the photo, Mary Ann said,I think this photo was taken on the set of “Girl Happy”. It was my first movie and I think this was a staged shot by the MGM photographer. As I remember, I did not sing in that movie but in my second movie at MGM I did pretend to play (guitar) and sang a song called “Get Yourself a College Girl”…….the movie had the same title.

By the time of the 1966 release of Spinout, Elvis is seen briefly with an LG-1 among many other guitars in the movie. By this time though, the body of the guitar including the pickguard appears to have been painted a mustard color for whatever reason, possibly because of its abuse in Viva Las Vegas or to give it a more “mod 60s” look for the film. The guitar makes its final appearance in the 1968 release of of MGM’s Live a Little, Love a Little, but played byMichele Carey’s character in one scene.

Gibson introduced three LG models, the 1, 2 and 3, in August of 1942 but production on the LG-1 and LG-3 stopped after only about 100 of each were produced until after the war. All three models had different top materials and bracing. Originally, the LG-1 had a mahogany top and chocolate brown top finish and x bracing, the LG-3 had a blond natural spruce top, and the LG-2 had a spruce sunburst top. All are 14 1/8″ to 14 1/4″ wide (2″ narrower than a J-45), mahogany back and sides, mahogany neck, dot fingerboard inlays, 24.75″ scale length, silkscreen gold decal “Gibson” logo. During World War II some models had maple backs and sides and maple laminated necks.*

When the LG-1 and LG-3 were reintroduced in 1946 the three models had different features between them. The LG-1 now featured ladder bracing, mahogany back, no lengthwise center seam on inside back, mahogany sides, mahogany neck, rectangle bridge with black pins, single bound top and back, sometimes darker sunburst finish than the LG-2, to hide the lower quality spruce top, In 1958 the LG-0 was introduced as the new low-end flattop model with ladder bracing, mahogany top with a brown finish. The ladder braced LG-0 and post-war LG-1 were essentially considered beginner’s guitars.*

In 1955 the LG-1 (and others) started featuring a larger tortoise pickguard with a point and in 1962 Gibson introduced them with a short lived plastic upper belly bridge. In 1966 a rosewood bridge with an adjustable saddle was used and then the guitar was discontinued in 1968 though models were seen as late as 1974. The LG-2 and LG-3 were replaced in late 1962 by the B-25 and B-25N, though some models were as late as 1963, and were produced until 1977.*

This page added August 15, 2010 is part of the sections The Guitars of Spinout and The Movie Guitars of Elvis Presley.

Special thanks to Mary Ann Mobley for her input and to Jeff and RocknRoll Vintage Inc. in Chicago, a great source of vintage and used guitars for sale, for their assistance with photos.

Promotional pictures taken at various times throughout Elvis’ career have been used in different ways over the years to promote his products that do not necessarily have anything to do with the movies they were shot for at the time, as in the case of this 1971 French pressing of songs recorded at Sun in 1955 with a cover featuring a shot taken during production of Kissin’ Cousins.

The guitars discussed here were identified as LG-1s because of the lack of a visible center seam through the sound hole in the picture with Mary Ann Mobley. However, a guitar at auction by Julien’s with a letter from Charlie Hodge identified as an LG-2 with the serial number of 69593 impressed in the wood misidentified as a 1951 is claimed to have been used in the film In Happened at the World’s Fair and subsequently from Elvis’ collection.

According to the Bluebook of Gibson guitars:

In 1961 Gibson started a new serial number system that covered all instrument lines. It consisted of numbers that are impressed into the wood. It is also generally known to be the most frustrating and hard to understand system that Gibson has employed. The numbers were used between the years 1961-1969. There are several instances where batches of numbers are switched in order, duplicated, not just once, but up to four times, and seem to be randomly assigned, throughout the decade.