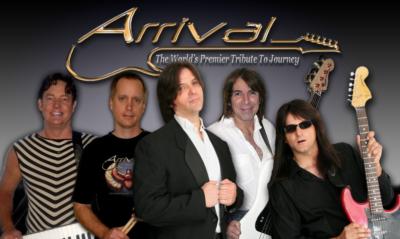 MODSTOCK (Modesto Rockstock, the 1st annual Modesto Rock Festival), adds Journey Tribute Band ARRIVAL to the line-up for our August 7th concert at Mancini Bowl. Through the sponsorship of Roberts Auto, VMIRocks presents an all-day event with a dozen VMI student bands sharing the stage with just as many Pro bands. We want to bring together the music community and have our students be part of it.

Its the dream of every Journey fan to see the amazing lineup that dominated arenas worldwide in the late 70s, 80s and mid 90s. What if you could see “that” band again? Journey will begin touring in 2011, but for those that still want the Steve Perry Sound check out ARRIVAL-The Premier Tribute to Journey.

ARRIVAL takes their audiences on a musical Journey to an era in rock classics covering top hits from 1978-1996. They are hailed by critics and fans alike as the most authentic and endearing Journey tribute in the country. ARRIVAL recreates note for note accurate renditions of JOURNEY Classics. They not only sound like Journey but dress the part. Based in California, ARRIVAL has performed countless shows since its inception in 2005. Jeff Salado has a devoted fan base, in both Northern and Southern California and many other parts of the world. ARRIVAL delivers a high energy enthusiastic show, and of course note for note accurate renditions of JOURNEY classics. ARRIVAL recreates the feel of being at a LIVE JOURNEY concert. Salado is joined by band mates Val Popovic, Guitar; Marvin Sperling, Bass; Dave Hawkes, Drums; and Peter Burt, Keyboards, Keytar, Guitar, and vocals, all of whom are known as some of the best musicians. Fans who have seen ARRIVAL live compliment them for their amazing re-creation of the entire production. Their main goal is to connect with the audience while playing such hits as Wheel in the Sky, Don’t Stop Believin, Anyway You Want It, Faithfully, Lights, Still they ride, Separate Ways, Open Arms, Lovin Touchin Squeezin, Who’s Cryin Now, Mother Father, Be Good To Yourself, Faithfully and more. www.journeyrevisited.com

46 bands, the biggest concert we have ever done! All musicians should be there at least 3 …